TerraForm Labs proposes to burn $1.3B in UST to save LUNA

TerraForm Labs proposes to burn $1.3B in UST to save LUNA

Terraform Labs scrambles to save LUNA with another burn proposal that sacrifices roughly 8% of the total supply of UST. 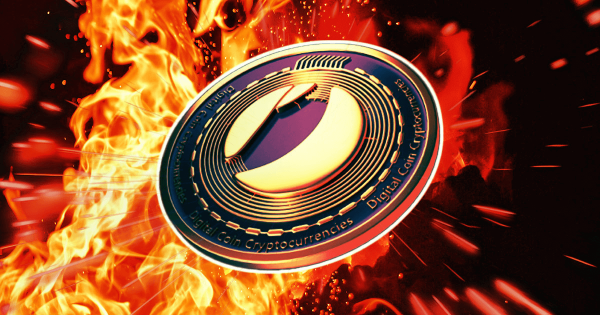 Terraform Labs proposed to burn a total of $1.3 billion worth of UST to save LUNA to combat the current crisis.

A three-step emergency plan was posted on the project’s Twitter account, which included proposal 1188 — to burn the remaining UST in the community pool and the cross-chain.

Approximately $1 billion UST remains in the community pool, according to the proposal. With the $371 million UST on cross-chain ethereum, the total amount in question is a little higher than $1.3 billion UST. This equates to about 11% of the outstanding UST liabilities.

The team hopes to reduce the UST circulation by roughly 8.05% with the burn.

The project team also staked 240 million LUNA to strengthen the network governance. The amount equates to $200 million, and some community members seem to think that it won’t be enough to save the project.

Regarding 3, the way things are going you would need to stake a lot more than 240 million $LUNA to ensure the safety of the network. $LUNA crashing in price and having the peg not restored is also a problem, the longer it takes the more $LUNA gets minted.

The burn plan also refers to proposal 1164, which was released yesterday and aimed at increasing the burn rate of UST.

Proposal 1164 offers to increase the mining capacity from $293 million to $1200 million by doubling the size of the Base Pool and halving the number of Pool Recovery Blocks.

“Yes, billion of UST will be burned, and LUNA will be diluted significantly. Nevertheless, there are no limit in LUNA supply, this market mechanism will actually work to bring stable UST and stable LUNA price (although likely at lower price point for LUNA).”