Elon Musk is probably associated with a DeFi project driven to induce Terraformation of the Earth and also other planets. 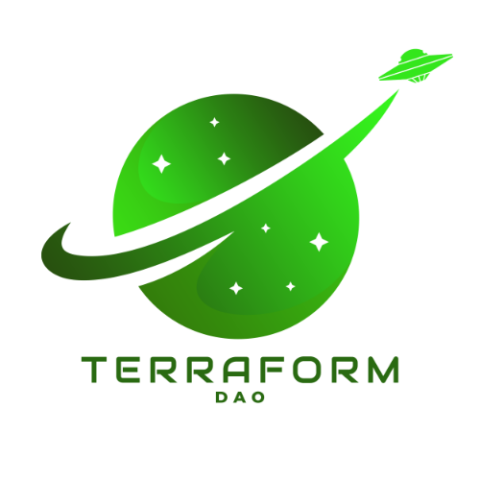 San Francisco, CA – April 08, 2022 – A long-time champion of a sustainable world, Elon Musk has always been at the forefront of protecting the Earth from degradation and paving the way for a more habitable environment for life on the planet. Cut to 2022 April, Musk is believed to have taken a step forward to turn his vision of sustainable future into reality. In a recent turn of events, it has been brought to attention that the SpaceX trailblazer has been possibly involved with a cutting-edge DeFi project called Terraform DAO – a futuristic project dedicated to establish Terraformation in Earth (and other planets) to empower them to support and  sustain life

Terraformation aka Earth-shaping is a process that aims to modify the environment of a planet with the goal to make it habitable for living beings like on Earth.

The rumour about Elon Musk’s involvement with Terraform DAO started with one of his recent leaked tweets (released under his Twitter account) but was deleted in just a few seconds. Here goes the exact tweet-

“While many look to the stars for refuge from current and future storms, we believe our first priority is to enhance life on earth”- Terraform Earth 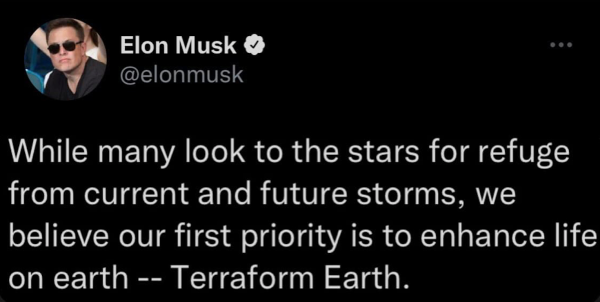 It takes no more than nano seconds for celebrity tweets to go viral on social media and more so if it comes from an icon like that of an Elon Musk. Needless to mention, the word is traveling fast in the ENTIRE DeFi space and the community just wants answers! Terraformation has been dropping coded mysteries through its community telegram. Here is why people believe Elon is behind the futuristic DAO project-

And, then there is more…

A team member from leading OTT platform Passionflix (who wishes to not be identified) had leaked information that Tosca Musk, Elon Musk’s younger sister, would be leading the Terraform project.

The Terraform DAO DeFi project has emphasized that continuous acts of environmental degradation pose the risk of making the Earth unlivable in near future. In such dire crisis, the most viable solution rests in development of a new “Home” through the process of Terraformation.

“The Earth is in danger; the continual degradation of the environment poses a colossal threat to the future generations. From wars to pollution to global pandemic, and regular lifestyle, all have contributed to the deterioration of our climate, natural resources, and food supply today. Our planet might become unlivable in near future and we have to take action NOW. At Terraform DAO, we believe the answer lies in ‘Terraformation’ which will help to develop a new safe home for our future generation”, stated the leading spokesperson from Terraform DAO.

As per the statements of the spokesperson, Terraform DAO is poised to start the process of Terraformation with the Earth to make it habitable and safe for life once again.

“We are driven by the vision to leave behind a Better, Safer, and Sustainable world for our future generation. We are looking forward to establish the process of Terraformation of earth with a DAO that comprises of dynamic and conscientious innovators and enthusiasts, who are dedicated to make the Earth more Earth-like once again.”

Speaking on, the spokesperson shared that Terraform DAO will invest in advanced technologies for clean water, food, and energy production that will make the earth a more habitable place- yet without polluting the planet and draining out its natural resources.

However, Terraformation of the earth is just the beginning. The state-of-the-art DeFi project also has plans to invest in advanced technologies that would be able to terraform other planets in the solar system and beyond.

“Terraform isn’t just a Charity Coin. Rather, it’s a breakthrough movement that will improve our planet through investments in and partnership with cutting-edge technologies like  blockchain-powered projects and other such advanced projects that believe in our mission.”

There is no denying of the fact that the current state of the Earth spells doom for the next generation. Standing in such grim circumstances, the world is in desperate need of a pragmatic solution that would be able to ensure habitable conditions for living beings in the coming years. Terraform DAO is all set to make a historic move for the planet (and other planets in near future) which might change the course of history in the coming times and for better. However, the success of the project is largely dependent on the DeFi platform’s ability to channelize its plans and technologies into real action. And that calls for dedicated support from industry leaders who are committed to the goal. So, if a visionary like Elon Musk is actually involved with Terraform DAO, it probably brings hope for the DeFi project and also life on earth in general. 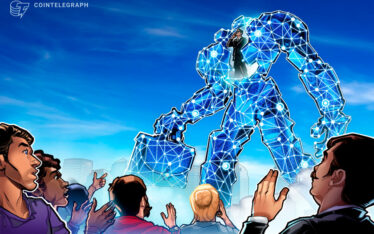 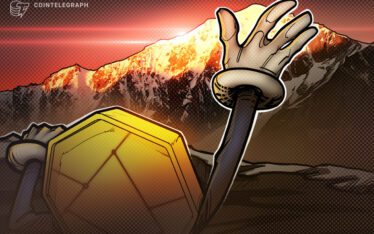 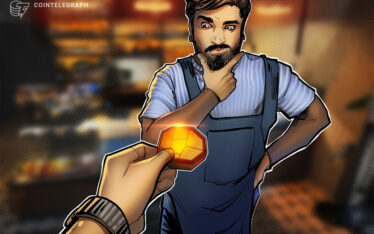 New survey sheds light on people’s concerns about investing in crypto
Eighteen percent of respondents in a new survey said that learning more about the benefits of investing in cryptocurrency was the most effective approach to transition from skeptic to believer....
1 Likes
We use cookies on our website to give you the most relevant experience by remembering your preferences and repeat visits. By clicking “Accept”, you consent to the use of ALL the cookies. By proceeding you understand and give your consent that your IP address and browser information might be processed by the security plugins installed on this site.
Do not sell my personal information.
Cookie settingsACCEPT
Manage consent